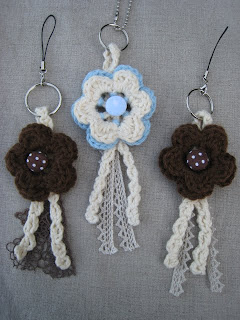 I crocheted more flowers and attached lace, fabric covered buttons, and other accessaries to make cell phone charms.  I like the brown crochet flowers, as much as I like the pastel colored ones. 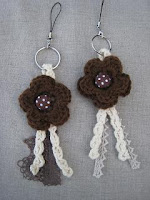 Attached to the cell phone, the charm will look like this.

By the way, I haven't used my sewing machine for more than 10 days now, because my baby is still in the shop for service...  Besides the regular clean up, the shop owner had told me that some repairs were necessary to fix the bobbin case and few other parts of my Brother (which I had to agree, because the "automatic threading" function wasn't "automatic" any more lately).  The total repair & cleaning will cost approximately $200 (!!!) and the shop owner had called me up to ask if I still wanted to fix my machine, despite the high price... (Remember, my machine's original cost was a little more than $300).

It was a difficult decision to make, but I decided to had it fixed.   Not only because I liked my Brother very much but also because even if I decide to purchase a new one,  it won't be after several weeks later (or even months) as I don't think I can make up my mind on which sewing machine to buy.   I tend to get puzzled and confused when it comes to selecting the right sewing machine ... I would rather pick a new car than to pick a new sewing machine (very difficult decision; as sewing machine plays a major role in my life now)!!
on 2/13/2010

Email ThisBlogThis!Share to TwitterShare to FacebookShare to Pinterest
Labels: crochet and knit

Oh, sorry to hear about your machine not only still being in the shop, but more expensive to repair. What a pain. I hope you get it back soon. I agree with you about choosing a machine, too, it can be very difficult!

Hi, Sam :) I didn't think that I'd miss my sewing machine this much...sobs :< And yes, it's a pain that I'm going to end up paying more $$$ to fix it than initially thought! Lately, I'd been checking out various machines on the web (just in case) and as I had imagined, I'm totally puzzled...!

Intro to my video tutorial (in Japanese) 日本語コメント(^^);

Please ask my permission to use any photographs, designs, or content from this blog. Thank you! 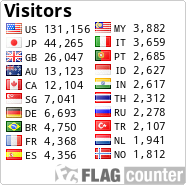